The Beacon story: Turning ordinary moments into something special

For almost 100 years, Beacon has been creating much-loved sweets and chocolates that bring magic to everyday occasions across South Africa. Every juicy jelly tot, toffee, mint, liquorice allsort and chocolate block tells the story of our endless quest for world-class quality and abundant variety, at a price everyone can afford. Join us on a look back at how it all started. 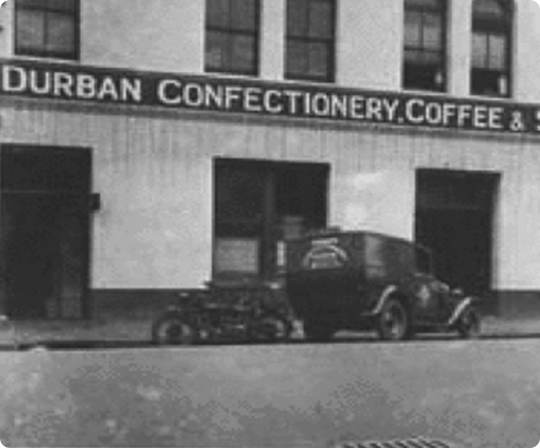 The birth of Beacon

Beacon began as a family business in a small double-storey building on Commercial Road near the Durban station. In 1931, a Lithuanian immigrant called Hymie Zulman and his wife Mary bought Durban Confectionery and Spice Works for £500. They started producing handmade boiled sweets, toffees, cordials and coffee with a team of six workers.

Mr Zulman regularly travelled abroad to purchase state-of-the-art production machinery. On one such trip to the UK, he saw a neon-light advertisement in the shape of a lighthouse, which inspired him to use this motif and call his brand Beacon. In 1936, the name was officially changed and, in 1938, Beacon started making chocolates for the first time. It had more than 60 permanent staff by then and caught the eye of well-known British confectionery manufacturer, Maynards.

Finding the space to grow

Beacon first formed an alliance with Maynards in 1939, and started producing Maynards sweets. By 1949, Maynards acquired shareholding in Beacon and the very first Maynards Wine Gums came to South Africa. This was also the year Mr Zulman had the foresight to buy a large six-acre site in Mobeni and build new factory buildings, storerooms and offices, giving Beacon the space to grow. By now, Beacon’s much-loved sweets and chocolates were delighting young and old around the country. A major milestone for the Zulman family was buying back the Maynards shareholding in 1967, and achieving 100% Zulman family control in 1969.

Innovative from day one

Beacon produced many industry firsts, including its milk chocolate Easter eggs and range of pre-packs. Remember pick-and-mix? Another Beacon first, in 1961. Because of this forward-thinking, Beacon grew to be a major player in the South African sweet and chocolate market. Shortly after its 50th birthday, Beacon became the first South African company to win the prestigious International Food Europe Award in 1982.

The Zulman family has a proud heritage of inclusivity and generosity – in particular under the leadership of the founder’s son, Arnold Zulman. Among his progressive deeds were having a racially integrated workforce in the 1970s, long before apartheid ended, as well as lobbying for women to receive equal pay.

Beacon has always been involved in uplifting and supporting local communities. In 1981, Mr Zulman donated R110 000 to build the KwaZubumnandi Preschool in Durban, which cared for 72 children at the time (KwaZubumnandi means ‘a sweet home’ in isiZulu).

Teaming up with the market leader

In the 1990s, Beacon became part of the Jungle Oats family and is now 100% owned by Tiger Brands, a JSE-listed company and one of the largest food manufacturers in Southern Africa. Beyond our borders, we are also sharing delightful Beacon moments around the world, exporting to regions including the Middle East, Australia, Africa, Europe and the Far East.